Maintenance and enhancement of the nation's air defence is among the primary tasks of the Finnish Air Force. This requires the continuous development of air defence capabilities in order to meet challenges posed by future changes in the operating environment.

The objective of Finland's air defence system is to prevent and when necessary engage any threat directed against the nation from the air. The Air Force monitors military developments in the region as well air defence trends on a global scale, using changes in the operating environment as a yardstick for assessing its own performance. Subsequent analyses made by defence planners are then used to identify actions that will be needed to maintain and improve the service's capabilities over even several decades to come.

Among the most notable measures over the past years have been two mid-life upgrades given to the Air Force's Boeing F/A-18 Hornet multi-role fighters in 2006–2016.

Finland's next multi-role fighter will be the Lockheed Martin F-35A Lightning II. The current Hornet fleet will be phased out as planned from the year 2025. The first Finnish F-35 fighters will begin service with the Finnish Air Force in 2025 as part of the training of Finnish personnel in the United States. The first F-35s will be delivered to Finland in 2026.  In Finland the F-35 system will replace the Hornet fleet in the fighter wings between 2028 and 2030.

The main contributors to Finland's air defence effort are the Air Force's Boeing F/A-18C and F/A-18D Hornet multi-role fighters. The Air Force started receiving Hornets in 1995. Since then, the type has been subject to continuous development and will reach its full potential during the second half of the 2010s, when its performance will be commensurate with its current operational environment. Subsequent upgrades to 2030s standards will not be feasible due to airframe age and obsolete systems.

The government endorsed the purchase of the Hornets in 1992, and deliveries took place in 1995–2000. With the Hornet, the Air Force made a leap from the obsolescent MiG-21 and Draken interceptors to an aircraft that was at the top of its class on worldwide scale.

While the multi-role Hornet is the key air defence enabler, it is a complex and expensive system that must be maintained at the the highest level of performance for decades in a threat environment that is in a state of flux.

The Hornets are expected to remain in service into the late 2020s, by which time the technology of the 1990s vintage would have been hopelessly obsolete without upgrades. This was already understood in the planning stage of the Hornet program.

Already during fleet beddown, the Air Force was drafting a project plan for aircraft life cycle upgrades and calculated the aircraft's life cycle costs over its anticipated 30-year service life.

Guidelines for the upgrades were also laid down in a number of Government White Papers on Security and Defence Policy written during the past two decades. The findings of the Defence Forces Striking Capability Report issued in 2004 led to the launch of a development program to boost the Hornet's capabilities in order to enable the aircraft to support tasks that had been assigned to the Air Force in a Defence Forces long-term development plan.

The foregoing documents called for an upgrade to the Hornet's counterair capability to meet challenges posed by changes in the operational environment. The Air Force was also tasked to confer the aircraft with a standoff air-to-ground capability.

This new capability is an element in an extended combat force projection program of the Defence Forces and enables the Air Force to employ precision-guided long-range weapons for expeditious support of joint operations so essential to modern warfare. It also expands the Air Force's role in protecting the other services and nation's vital assets.

Over its life span, the Hornet has been subject to systematic updates – some of minor nature, others full-scale upgrades. These updates have been ordered by the Defence Forces and they have been the joint effort of Boeing as the airframe manufacturer, the United States Navy, and the national defence consortium Patria, which is one of the strategic industrial partners of Finland's military.

Major updates and modifications made on the Hornet were split between two distinct phases, each consisting of a range of component replacements and system modifications. The first of these, dubbed Mid-Life Upgrade 1, was completed in 2006–2010 while the serial production of the second phase, designated Mid-Life Upgrade 2, took place between 2012 and 2016. The aircraft received the upgrades in conjunction with scheduled maintenance visits at the Patria Aviation plant at Halli in Jämsä.

The focal point of MLU 1 was the revamp of the aircraft's air-to-air capability in order to maintain the type's cutting edge in counter air operations in the existing operational environment.

The upgrade also involved the incorporation of a helmet-mounted sighting system mated with the state-of-the-art AIM-9X Sidewinder infrared guided missile for improved close-in air combat performance. Equivalent systems have been in use with air services in Finland's vicinity for more than a decade. MLU 1 also introduced features to better the pilot's situational awareness and joint operation capabilities.

The Air Force has trained its aircrews, maintainers, and airmen of other trades in the employment and maintenance of the F/A-18 air-to-ground ordnance introduced in 2016. The photo shows reserve NCOs learning the tricks of handling a precision-guided JDAM bomb in a refresher training event. Photo: Air Force / Minna Piirainen

Three Types of Standoff Weapons to Suit Any Range

The second upgrade, MLU 2, concentrated on the acquisition of air-to-ground weapons and their integration with the aircraft. In a nutshell, MLU 2 enabled the Air Force to exercise the full potential of the Hornet, which was originally designed in the United States as a multi-role fighter with a wide range of air-to-air and air-to-ground capabilities.

The Finnish air-to-ground weapon suite was selected to meet a wide variety of mission requirements in a cost-effective package consisting of direct-attack smart bombs, medium-range glide weapons, and long-range standoff missiles. The electro-optical Litening targeting pod was also fitted. Also, MLU 2 further upped the Hornet's capability in the air combat role and introduced modern self-protection, communication, and information distribution systems. Other system changes stemmed from the need for futher improved interoperability and changes in civil aviation regulations. The upgrades also contribute to increased security of supply and cost-effectiveness in operations.

MLU 2 included local structural beefing-up and purchases of line replaceable units and other spares to ensure the availability of the aircraft at operational units till the end of the type's life cycle. The entire upgrade program and associated purchases of materials have led to significant synergy benefits through cooperation with other Hornet users. Finland's national aerospace and defence industry also benefited from the transfer of technological know-how, made possible through the multinational nature of the program. Expertise thus obtained will be put into good use in the maintenance of the Hornet throughout the aircraft's remaining lifespan.

While the serial assembly of the MLUs was going on at Patria, the Air Force was getting ready for the beddown of the Hornet's air-to-ground capabilities. The new ordnance was subjected to operational testing and evaluation in Finland. The program involved several live JDAM drops over Rovajärvi range in Lapland. Hornet pilots along with aircraft maintainers and other specialists from various trades have been trained in the employment, handling, and maintenance of the new weapons.

With the completion of the last MLU 2 configured Hornet, the Air Force now can field an air-to-ground strike capability to meet the previously established requirements.The Finnish AIr Force F/A-18 fleet was cleared to carry precision-guided JDAM bombs and JSOW glide bombs in December 2017 and the integration of the long-range JASSM missile was completed in March 2018.

In April 2016, the Air Force deployed two Hornets and a detachment of around ten airmen to Naval Air Weapons Station (NAWS) China Lake in Nevada for JASSM trials and flight teststo verify the safe and correct operation of the weapon system on the Finnish Hornet. The program was completed in March 2018 with the succesful test-firings of two JASSM missiles from Finnish F/A-18s. 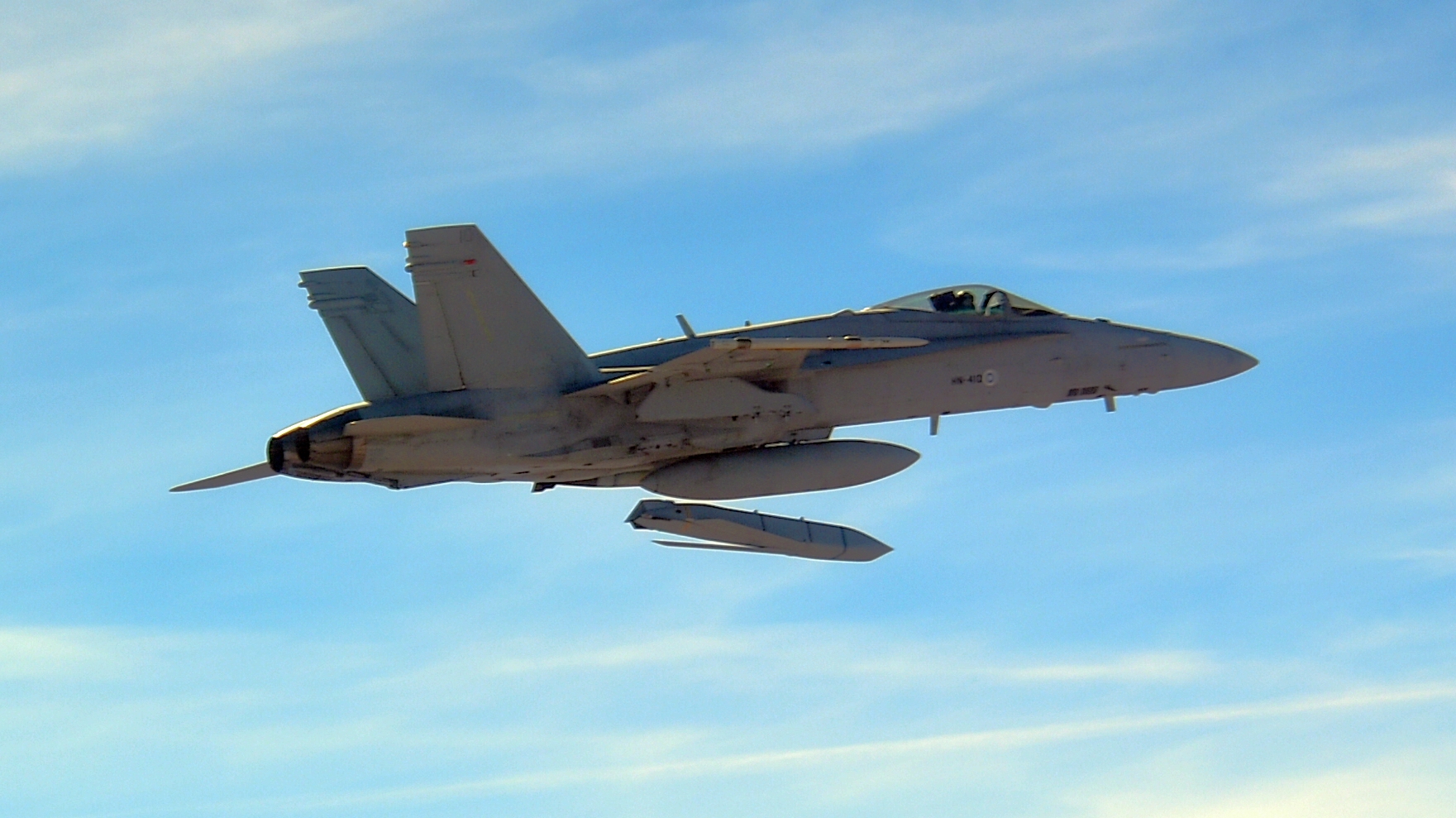 With MLU 2 fully fielded, the Hornet will be at the peak of its life-cycle performance relative to the surrounding operational landscape. The mid-life upgrades will maintain the prowess of the aircraft until replaced by more modern multi-role fighters in the 2020s.

However, they will not extend service life of the airframe since the cost-effective development of the aircraft's capabilities to meet the technological advances foreseen to occur in air warfare over the coming decades would not be a feasible option. Post-MLU 2 work will therefore include only updates and modifications to systems that are essential for the maintenance of flight safety and operational performance. The aircraft will not be given any new capabilities.