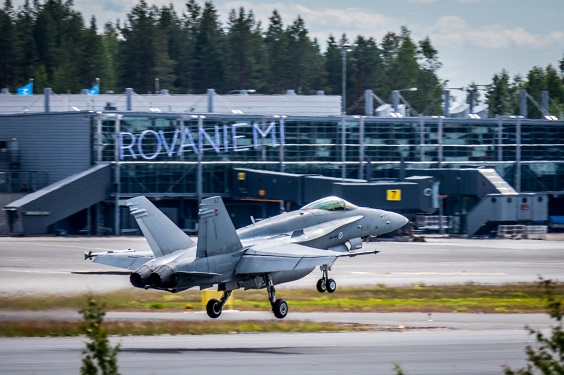 From 25 October to 7 November, units from the Army, Navy and Air Force train executing the tasks of the Finnish Defence Forces in a demanding multinational environment. The aim of Finland’s participation in Trident Juncture 18 (TRJE18) is to strengthen national defence capability and to enhance international interoperability.

Finnish Air Force participates in TRJE18 with two detachments. Five F/A-18s and 50 airmen will be deployed to Ørland Air Base in Norway. Four F/A-18s and approximately 100 airmen take part in the exercise at Rovaniemi Air Base in Finland. In addition, a few Finnish airmen serve in the exercise’s staff-level positions.

Air operations of TRJE18 take place mainly in the airspace of Norway and Sweden. The air forces participating in the exercise operate from four Norwegian air bases (Ørland, Bodø, Andøya and Gardermoen), Rovaniemi Air Base in Finland and Kallax Air Base in Sweden. In total, around 150 aircraft participate in TRJE18.

Read more about the exercise: