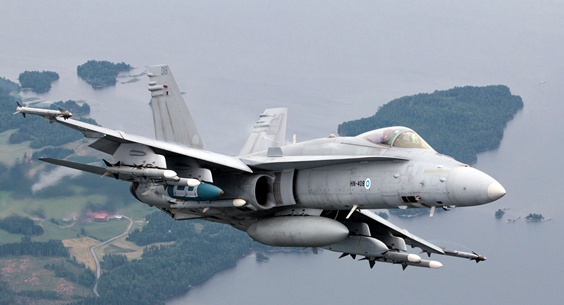 Responsibility for Finland's air defence and air operations is with the Air Force. As its secondary mission, the service supports other authorities and participates in crisis management.

Active air policing of the nation's entire territory demonstrates Finland's will and ability to surveil and safeguard its airspace. Most air policing missions are executed by the Air Force's Boeing F/A-18 C/D Hornet multirole fighters standing on quick-reaction alert rotation on air bases across the country. If an unidentified aircraft is detected inside or approaching Finnish airspace, a fighter jet may be scrambled to meet and identify the incoming aircraft, and turn it away if necessary.

In the time of a crisis, the Air Force will shift the focus on defencive counter air fighter missions and air defence fire control for all three services. It protects the nation's vital assets and functions from air attacks and enables the combat of the other services by countering air threats and employing air-to-surface weapon systems.

Under peacetime conditions, Air Force aircraft are normally located at the service's main operating bases (Lapland Air Command's Rovaniemi Air Base, Karelia Air Command's Rissala AB, Satakunta Air Command's Pirkkala AB and Air Force Academy's Tikkakoski AB). If a need arises to adjust readiness level, either in peacetime or in the event of a crisis, aircraft may be dispersed to road bases and other remote operating locations.

As one of the statutory tasks of the Defence Forces, the Air Force supports other authorities using its unique capabilities. It also contributes to the crisis management effort and maintains and develops its interoperability.

The commander of the Air Force is Major General Juha-Pekka Keränen (Curriculum Vitae).

The Air Force has approximately 2,000 uniformed and non-uniformed service members. The service trains around 1,300 conscripts each year.