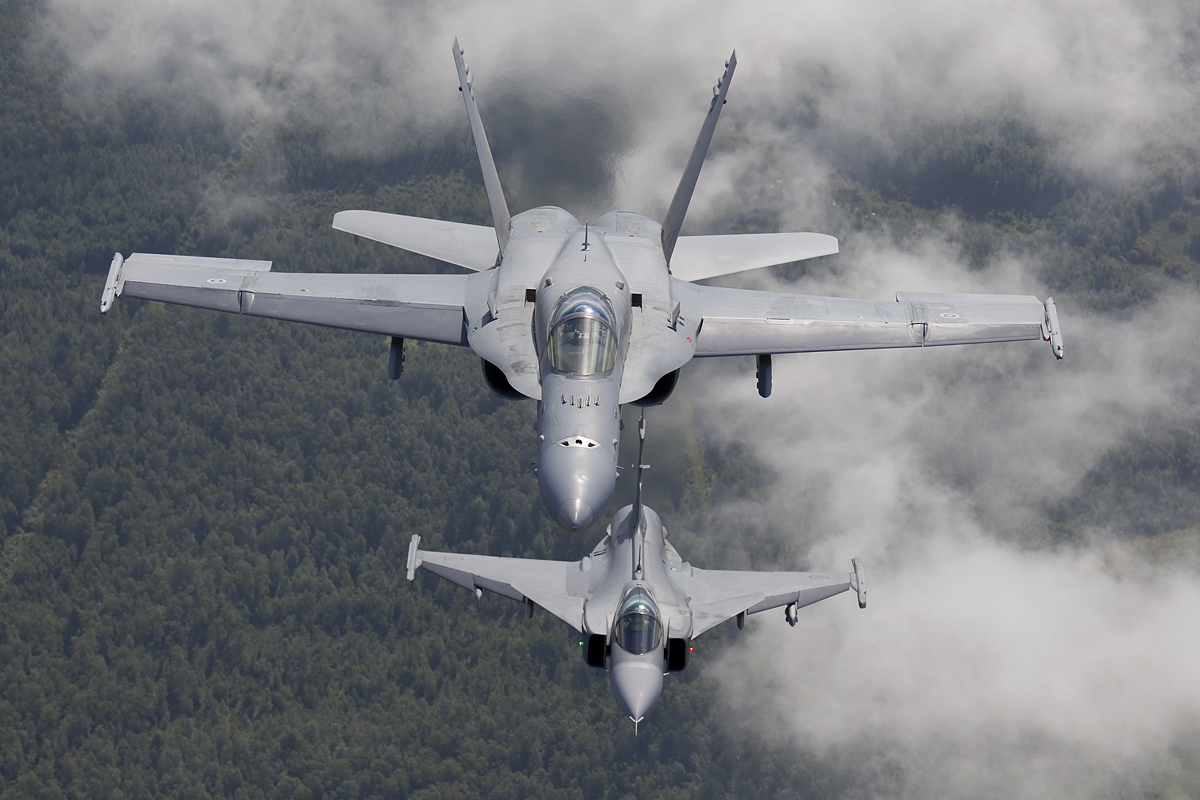 International co-operation is a part of the daily activities of the Air Force. The objective of co-operation is to share information and expertise with the key actors in the Air Force’s operating environment and to create opportunities for cost-effective training in the service’s main tasks.

The Air Force has sought know-how and ideas outside Finland’s borders throughout its history in many different ways. When the Air Force was established in 1918, air corps were a new military branch everywhere and their development had only begun on a global scale a few years earlier, when World War I started.

It was natural for the young service to seek influences abroad, and maintaining international connections and following the development of air defence elsewhere has remained an important part of the Air Force’s activities all the way to the present.

Through international connections, the Air Force gains a grandstand view of the global development of military aviation and an opportunity to practise its operations with the foremost air forces in the world. By participating in multinational training and exercises, the Air Force can adopt the best practices and operating procedures from around the world as a part of its own activities and compare its own capability to the international operating environment.

One important form of the Air Force’s international activities is participating in multinational air exercises in Finland and in Europe.

Multinational air exercises are typically planned to cater for pilots at a certain stage of flight training. Particular types of training missions offer pilots at the start of their career practice in basic tasks of military flight operations in an international operating environment.

The scenarios for missions flown in the more challenging exercises, which include diverse elements in the form of different kinds of air and ground units, provide a very realistic picture of the true course of air operations for the participants. It would be very expensive and challenging to organise such extensive training exercises without international co-operation.

The Air Force mainly participates in multinational exercises with Hornet multi-role fighters, but Hawk jet trainers and CASA C-295M transport aircraft have also been used in exercises on a smaller scale.

Co-operation in the north

Alongside the more extensive training events, the Air Force also carries out training operations with the Swedish and Norwegian Air Forces almost every week. The Cross Border Training missions (CBT) carried out in the countries’ airspace or at their borders are a way of organising cost-effective training that benefits all parties. The detachments participating in the CBT missions usually operate from their own home bases, which saves on the logistics costs of the exercise. Typically, aircraft from Finland, Sweden and Norway fly in the missions, but from time to time, participants from the air forces of other countries involved in the co-operation are also included. In addition to multi-role fighters, airborne warning and control system (AWACS) aircraft as well as in-flight refuelling aircraft have also participated in the missions.

The co-operation between Finland, Sweden and Norway also includes the Arctic Challenge Exercise (ACE) that was organised for the first time in 2013 in the northern parts of these countries. The exercise takes place every second year. In 2017, Finland was in charge of leading the ACE. The ACE, which brought together over 100 aircraft from the defence forces of eleven countries, is one of the largest air exercises of the year in the world. For the next time, ACE will be organized in 2023.

Co-operation between the Finnish and Swedish Air Forces (FISE)

Co-operation between the Finnish and Swedish Air Forces is carried out in accordance with the security and defence policy definitions of the governments of the respective countries. According to the report Final Report of Deepened Defence Cooperation between Finland and Sweden signed by the Ministers of Defence of Finland and Sweden in 2015, the Air Forces of these countries aim to deepen their co-operation in three areas in particular.

These include the interoperability areas of air operations (Air Ops), base operations (Base Ops) and command and control systems (Command and Control).

In the Command and Control area, the aim is to create technical preconditions and joint procedures based on which the Finnish and Swedish Air Forces can share the joint situation picture needed for the decision-making and leadership concerning operations, and to operate using compatible methods. The primary objective of co-operation is to achieve capability to carry out joint air operations.

On a practical level, the co-operation between the Finnish and Swedish Air Forces can be seen, in addition to the weekly Cross Border operations, in air exercises which develop capabilities in accordance with the goals set for FISE co-operation. The Finnish and Swedish Air Forces have participated in each other’s national main live air exercises since 2016 as part of the defence cooperation between the two nations. 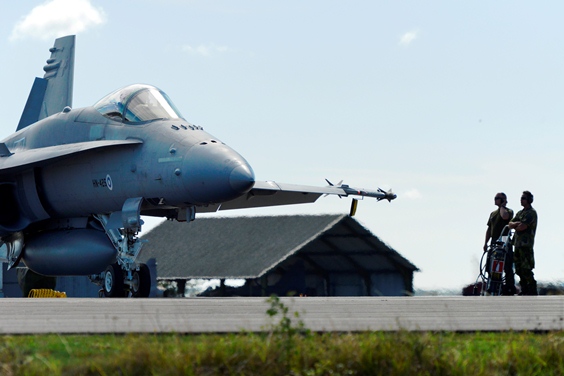 Among other things, the co-operation between the Finnish and the Swedish Air Forces includes ensuring the ground support services for the aircraft at the other country’s bases. In the image, a Finnish aircraft maintenance officer instructs a Swedish colleague in the line maintenance of a Hornet. Photo: Finnish Air Force

Many forms of international activities

In addition to exercises, the Air Force’s international activities also take many other forms. Since 2010, the Air Force has been capable of providing a detachment of four Hornet multi-role fighters and 250 airmen to the pool of forces available for international military crisis management operations. The Finnish Government makes the decisions on participating in the pool and the availability of the detachment for operations. The Finnish Rapid Deployment Force Fighter Squadron was entered in the NATO Response Force (NRF) Response Forces Pool (RFP) to be held in readiness for possible deployment in 2018.

The Air Force is also involved in Air Situation Data Exchange (ASDE) co-operation in which Finland and the countries in the neighbouring areas exchange information on the air situation.

The Air Force has hosted several bilateral squadron-level visits in which a foreign detachment comes to Finland for a period of time for co-operation in training and exercises. The Air Force also carries out international co-operation in arranging in-flight refuelling training for its pilots.

The training of the Air Force personnel and the compatibility of the materiel with a multinational operating environment form the basis of the international activities. In 2004, the Air Force started using English as the language of tactical flight training; English is the language used worldwide in military aviation. In flight operations, the metric units of measurement were changed to imperial units, which are more common in international aviation.

The mid-life upgrades MLU 1 and MLU 2 of the Hornet multi-role fighters, implemented in 2010–2016, also bolster the capability to participate in international operations. In connection with the upgrades, the radio and data link systems of the aircraft were updated so that they enable operation as a part of multinational exercise detachments as well as ferry flights in international airspace.