The Finnish Air Force’s fighter pilots have been trained with the Hawk jet trainer aircraft since 1980. During its long history with the Air Force, the Hawk has undergone a number of modifications to meet constantly changing air warfare requirements. Today steps are being taken to expand the flight training with the Hawk to incorporate practising in both real and simulated environments. The objective is to prepare student fighter pilots for future air warfare challenges. 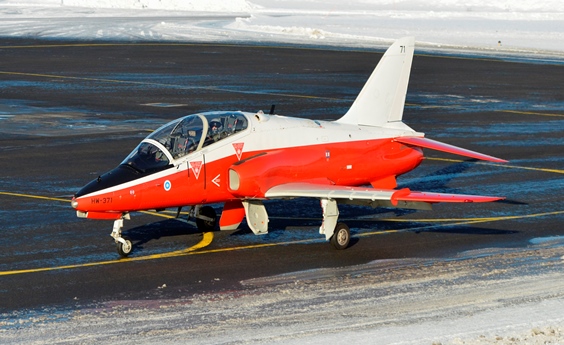 The Hawk jet trainer is used for training FINAF’s future fighter pilots in the fundamentals of flying jet aircraft and the basics of air combat tactics and technique. Thanks to the upgrades, the Hawk will remain in FINAF service until the 2030s. Photo: Ville Tuokko / Air Force

The British-built BAE Systems Hawk Mk 51 was selected as the Finnish Air Force’s jet trainer in 1977. Since 1980 the Hawk has been the training platform with which future fighter pilots, after having completed basic training with a propeller plane, are instructed in flying an advanced jet-powered aircraft and the basics of air combat tactics and technique.

After completing flight training on the Hawk, student pilots have always moved to the controls of the Air Force’s most capable aircraft - earlier the Draken and MiG-21 and as of 1995 the Hornet multi-role fighter.

According to the current plan, the Hawk will remain in Finnish Air Force (FINAF) service in its present role until the mid-2030s. Thus, we will still see many pilot generations trained with the Hawk, some of which will fly with the Hornet’s successor, the multi-role fighter to be purchased through the HX programme in 2025-30.

The Hawk’s record-breaking spell of 50+ years in pilot training has been enabled by its successful basic design, says Major Teemu Pöysti, Commander of Fighter Squadron 41 (FS 41) of Air Force Academy, the unit operating with the FINAF Hawks.

– The Hawk is reliable and can be operated for training purposes with fairly moderate resources while it also adequately resembles multi-role fighters by its characteristics. During the Cold War it enabled a smooth transition to interceptors of the period flying at many times the speed of sound. The Hawk has also served well in conversion training for the Hornet which has better manoeuvrability compared to its predecessors. Moreover, it is expected that the Hawk will fulfil the capability requirements to be set by the Hornet’s successor.

The lifespan of the Finnish Air Force’s Hawk has been sustained, for example, by means of a structural reinforcement programme to ensure the strength of airframes and wings in demanding training missions. In addition to fifty original Mk 51s, mainly retired from daily service, FINAF has purchased seven new Mk 51As in 1993 and 18 low-hour Mk 66s from the Swiss Air Force in 2008.

The long lifespan of the Hawk can be explained by both successful fundamental design and also by the versatility of the aircraft.

As from 2009 FINAF in cooperation with its strategic industrial partner Patria has worked on modernizing Hawks originally equipped with conventional analogue round-dial instruments to upgrade them with multifunction displays providing flight, engine and navigation data and a HUD projecting flight information in the pilot’s field of view. All this facilitates student pilots’ preparation for the cockpit configuration of the Hornet. In the same context, a mission data recorder system based on GPS navigation was installed on the Hawk.

– With the cockpit upgrade the flight and navigation data of the Hawk is displayed in a similar way as in multirole fighters, Major Pöysti continues. – This way student pilots can train operating procedures and methods used also when flying on the Hornet. – The other improvement resulting from the modernization is a provision for giving better quality feedback during debriefing when a student can review the conduct of the completed mission with the help of three-dimensional mission data with his instructor. 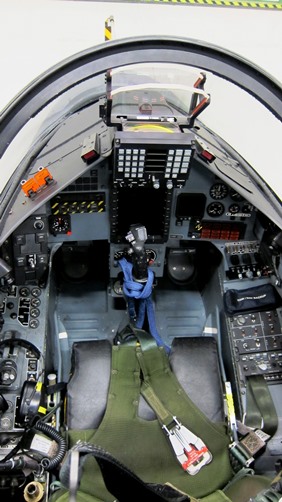 Flight training with the Hawk jet trainers started in FINAF in 1980. As from 2008 Hawk cockpits originally fitted with conventional instruments have been upgraded to correspond to the cockpit arrangement of modern multirole fighters. Cockpit upgrades also enable the development of air combat training. By means of the Hawk Link system Hawks can share and present each others’ position information on their displays in the same way as multirole fighters. Photo: Ville Tuokko / Air Force

The cockpit upgrade also made it possible to develop further the training environment that the Hawk provides.

Traditionally with jet trainers such as the Hawk pilots could have had training in air combat sorties to practice operating as part of a formation including one or more aircraft against air targets at a close range. Training with a jet trainer has its limitations because without a radar it can only intercept targets entering the range of fire of its gun or short-range infrared-guided missiles.

Although close-range air combat skills have always been the corner stone of airmanship of a military pilot, technological development of multirole fighters and changes in air warfare battlefields have triggered the process of extending the role of jet trainers.

– When developing the Hawk and the entire FINAF flight training system, we have had to answer the question of how we can create a training environment of future battlefield for student pilots keeping in mind the provisions of the HX Programme, Major Pöysti explains.

In the present and future working environment of multirole fighter pilots the focus is on situational awareness, correct information and associated decision making.

A pilot operates on the basis of a situation picture provided by an on-board radar and other sensors of the operators in the battlefield in the air, on land and at sea. A major part of what a fighter pilot does is to analyse the situation picture presented by on-board instruments and to make decisions on, for example, how to operate beyond-visual-range air-to-air missiles and precision-guided weapons designed for use against surface targets.

In addition, multirole fighters have to cooperate with ground-based air defence (GBAD), Army units and Navy vessels, for example, by receiving targeting information from land forces and surface vessels or coordinating interception and fire control with GBAD units.

– An LVC training environment makes it possible to create a complex and realistic operating environment for training student pilots in a cost-effective manner, says Major Pöysti. For instance, in regular training missions we cannot always operate with such a number of aircraft conducting target emulation sorties that can be achieved by integrating virtual and real training, but in an LVC environment there are no limitations on it. 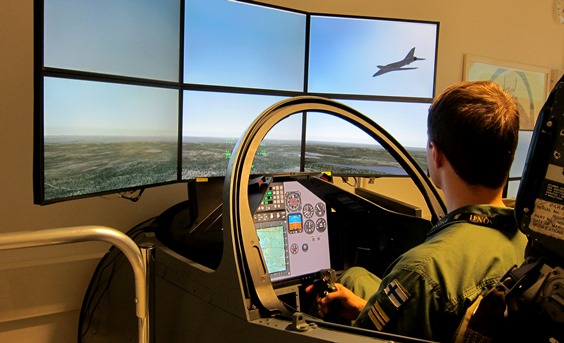 Real or synthetic? At present, student pilots of the Air Force Academy’s Fighter Squadron 41 conduct training missions using network based flight simulators. In the near future, a wing man seen on the simulator display can also be a real aircraft participating in the same sortie in the air. Photo: Ville Tuokko / Air Force

The Hawk jet trainer fleet is on the front line in the implementation of the principles of LVC training in the Finnish Air Force. The Air Force, Defence Forces Logistics Command and national defence consortium Patria have together developed the Hawk Link system that enables radio transmissions of position information between aircraft involved in a training mission.

Thanks to position information, a student pilot sitting in the front seat and an instructor pilot in the back seat can see information on manoeuvres of up to eighteen Hawks on their displays. In an air situational awareness display each aircraft can be designated with different symbols either as friendly, hostile or civil aircraft which more or less corresponds to the target information generated by a radar aboard modern multirole fighters, but not aboard an aircraft such as the Hawk. 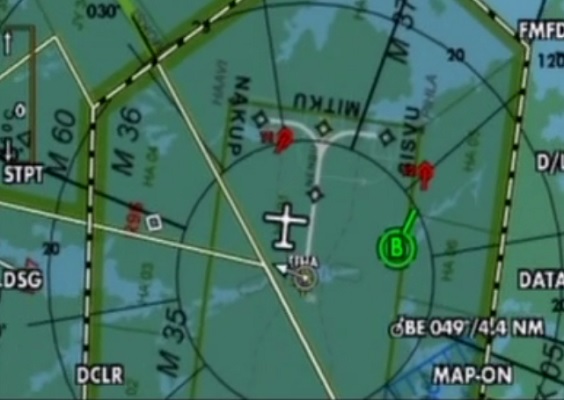 The Hawk Link system gives the Hawk a possibility to simulate a situation picture provided by a radar and other sensors corresponding to the Hornet multirole fighter’s operating environment and integrate artificial targets into a challenging training environment. The photo shows data seen on a Hawk’s tactical situation display on a flight test in December 2017 during which real and virtual training elements were integrated. A white aircraft-like symbol indicates the position of own aircraft. A green B letter designates another real Hawk operating in the same airspace. Targets in red represent targets controlled by ground-based flight simulators. Photo: Finnish Air Force

The Hawk Link has been implemented in a cost-effective way and its development has progressed fast, explains Captain Saku Tuomivaara, Defence Forces Logistics Command, involved in the program.

– In the Hawk Link system, position information is transmitted between aircraft by utilising radios removed from the Hornets in the Mid-Life Upgrades and the antennas of the Mk 66. A new Patria developed Multi-Purpose Controller Unit (MPCU) adapter device was equipped between Hawk mission computers and the newly added recycled link radios.

– The trial version of the system was installed in 2015 and flight tests began in 2017. In the initial phase the Hawk Link will be fitted into sixteen Mk 66 aircraft and in the summer of 2018 the first aircraft will be introduced into training.

In its initial stage, the Hawk Link program has enhanced the situational awareness of Hawk pilots from before. It is, however, even more important that there is potential for the development of the system, sums up Major Pöysti.

– Hawk Link equipment installations are only the beginning that offers a range of possibilities for the extension of LVC training. By developing the system software we can set up elements training of which merely in a real life would be extremely challenging, Pöysti concludes.

According to expert statements the extension possibilities of the Hawk Link include a great number of modern air warfare elements that can be incorporated in jet aircraft training in the future. For example, indications of GDAD units or interference that affects the situation picture could be presented on the displays of the Hawk. In the future it will also be possible to simulate firing long-range air-to-air missiles and air-to-surface weapons at air and surface targets. All this will be implemented so that a student pilot will not see the difference between a real and virtual environment, but he has to make a decision as if encountering a real threat.

The above mentioned ideas are just visions at this point but the first steps towards their technological implementation have been taken.

In mid-December 2017, the Air Force, Defence Forces Logistics Command and Patria carried out an experiment in which, during a test flight, two Hawk Link networked Mk 66s encountered virtual air targets that were controlled by the Hawk flight simulators. Artificial air targets shown on the Hawk’s displays may function as a factor increasing the degree of difficulty of a training mission when a student has to take them into account while selecting appropriate air combat tactics and technique.

So, the LVC solution can revolutionise flight training; but there is no need for limiting the application of its principles only to air combat training. Major Pöysti also reckons that Live, Virtual and Constructive training holds the potential for networking all units of the Finnish Defence Forces in the future.

– At the end of the LVC development process, we can see a promising vision where all operators in the battlefield, whether of the Air Force, Army or Navy, can train in a similar environment that integrates real and virtual operations with synthetic operations generated by man-controlled training devices. This would, for instance, enable the Finnish Defence Forces’ joint training in an incredibly versatile and realistic environment. 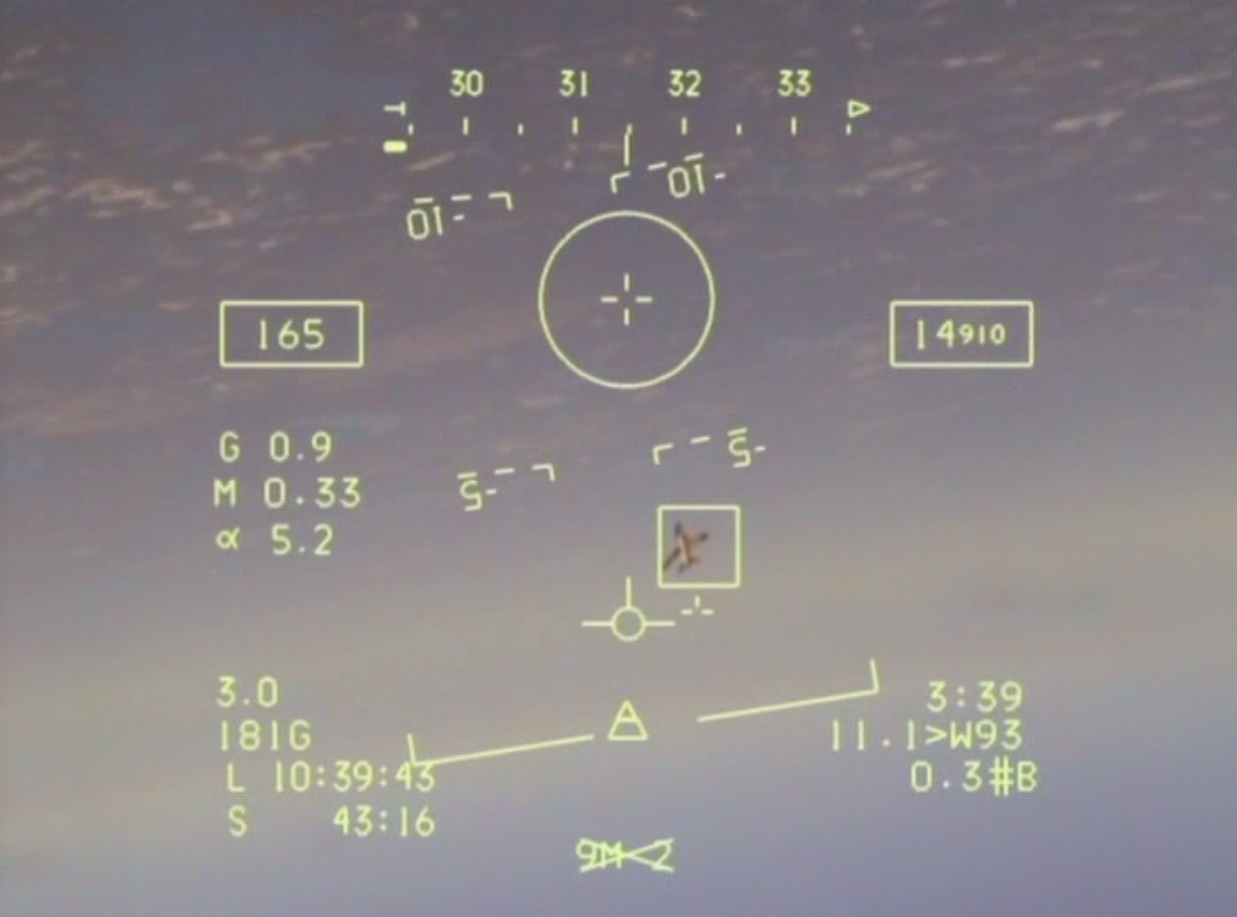 The Hawk jet trainer does not have a radar like modern multirole fighters such as the Hornet has that enables to detect beyond-visual-range targets and launch air-to-air missiles at them. However, the Hawk Link system that transmits the position information of the Hawks involved is capable of simulating this feature. A Hawk jet trainer is chasing another Hawk in dogfight training. The TD-box (Target Designation) around the target aircraft on a HUD emulates an indication of radar lock-on as seen in a multirole fighter. Photo: Finnish Air Force