All the sixty two Finnish Air Force's Boeing F/A-18C and F/A-18D Hornet multi-role fighters have been upgraded to the MLU 2 configuration. The last aircraft having undergone the serial assembly of the second mid-life upgrade (MLU 2) was rolled out of Patria Aviation’s production line at Halli, Jämsä, on 9 December 2016. 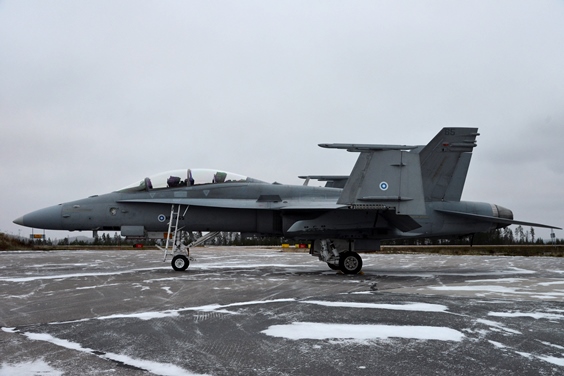 The last Hornet come off the MLU 2 serial production line is the two-seat HN-465.

The F/A-18D Hornet with a registration number HN-465, one of the Air Force's seven two-seat Hornets, was the last aircraft rolled out of the MLU 2 production line. The serial assemblies of  MLU 2 are now completed to all Air Force's sixty two single and two-seat Boeing F/A-18 C/D Hornet multi-role fighters. The first upgraded aircraft was placed into service in spring 2013.

In conjunction with the Mid-Life Upgrade 2 completed from 2012 to 2016 the Hornet was equipped with the capability, among others, to support land, maritime and air battles with standoff air-to-ground weapons.

The introduction of the new capability is based on the Government Reports on Security and Defence Policy in the 1990s and 2000s, the findings of the Defence Forces Striking Capability Report of 2004 and the tasks assigned to the Air Force in the Defence Forces development programme, explains Colonel Pasi Jokinen, Deputy Chief of Staff Air Force Command Finland.

- The Hornet's air-to-ground weapons as a new option in the Defence Forces range of capabilities enables to employ effective precision-guided weapons for expeditious and flexible support of joint operations in various locations. Thus, the Air Force is capable of supporting joint combat not only by repelling airborne attacks but also employing weapons against fixed targets where instantly required.

To install air-to-ground weapons to the Hornet having previously only air-to-air capability, the fleet underwent a series of assemblies and modifications of the equipment and systems required for a new capability in 2012– 2016.

Lieutenant Colonel (Eng.) Harri Korhonen from the Aeronautical Systems Section of the Defence Forces Logistics Command says that serial assemblies were designed in cooperation between the Finnish Defence Forces, Patria Aviation as a strategic industrial partner responsible for maintenance and repair services of the Finnish Air Force's Hornets, Boeing as the airframe manufacturer of the Hornet and the United States Navy, the aircraft's primary user.

- In serial assemblies all the MLU 2 modifications and assemblies were completed on the Hornet. They were such as wiring works of new equipment and weapons on all sixty two aircraft, tells Lieutenant Colonel Korhonen. Modifications and updates were carried out at Patria Aviation facility in Halli, Jämsä, in conjunction with scheduled maintenance, and exactly within the set time limit.

During the design and implementation process of the mid-life upgrades the Hornet's primary user, the United States, had the opportunity to transfer its know-how and expertise in implementing comprehensive upgrades to Finland's national aerospace and defence industry. This guaranteed that part of the component manufacturing, including wiring works, could be accomplished in Finland and, also, know-how needed to plan maintenance for the remainder of the Hornet's service life is in homeland use.

While modifications and assemblies were under way, the Air Force prepared for introducing air-to-ground capability also in other fields. The new ordnance was subjected to operational testing and evaluation in Finland. The program involved several live JDAM drops over Rovajärvi range in Lapland. In addition, Hornet pilots along with aircraft maintainers and other specialists from various trades have been trained in the employment, handling, and maintenance of the new weapons.

- With the completion of the last MLU 2 configured Hornet, the Air Force now can field an air-to-ground strike capability to meet the previously established requirements. The aircraft has been cleared to carry precision-guided JDAM bombs and JSOW glide bombs. The integration of the long-range JASSM missile is scheduled for completion in 2017, Jokinen tells.

In April 2016, the Air Force deployed two Hornets and a detachment of around ten airmen to Naval Air Weapons Station (NAWS) China Lake in Nevada for trials and flight tests. NAWS China Lake is the primary weapons research and test facility of the United States Navy. The purpose of the tests is to test and verify the safe and correct operation of the JASSM on the Finnish Hornet. The program will be completed by September 2017. 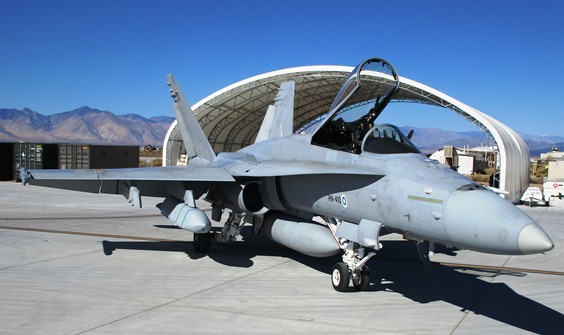 The integration of the long-range JASSM missile on the Finnish Air Force’s Hornet will be carried out in the United States. The photo shows a JASSM fitted on a Hornet's wing pylon at NAWS China Lake during flight testing and associated trials.

The Finnish Air Force's Hornet multi-role fighters were introduced into service in 1995–2000. It was already known during the purchase process that the capabilities of the fighters to remain in service till 2025–2030 will be subject to continuous and systematic development over their entire life cycle. This is the only way, according to Pasi Jokinen, to ensure the fighters' capability of performing their missions in a rapidly evolving air defence environment on a global scale.

- The fundamentals of a multi-role fighter design such as airframe and power plant operate almost unchanged with the help of maintenance and overhauls for the entire life span of the aircraft. However, changes in the operating environment, for example, the development of weapons systems and the provision of interoperability with the partner nations' C3 and data transmission systems and new civil air navigation systems, require making the electronics and software updates to aircraft.

The Finnish Air Force’s Hornets have undergone two mid-life upgrades. The Mid-Life Upgrade 1 (MLU 1) completed in 2006–2010 was aimed at maintaining and improving the aircraft's air-to-air capability. One of the most significant improvements given by MLU 1 was the incorporation of a helmet-mounted sighting system mated with the AIM-9X Sidewinder infrared guided missile with a wide-angle seeker head for enhanced close-in air combat performance. The Mid-Life Upgrade 2 (MLU 2) in 2012–16 focused on providing air-to-ground capability.

Alongside with the upgrades, the Hornet's capability has continuously been sustained by further spares purchases, structural reinforcements and engine overhauls to ensure its sundown. Consequently, the Hornet is capable of accomplishing its operations safely and reliably till the 2020s. Then a new multi-role fighter to be purchased through the HX Program replaces an obsolescent fleet. - There will be no post-MLU 2 work; the Hornet will not be given any new capabilities. Only updates and modifications that are essential for the maintenance of flight safety and operational performance will be carried out, Lieutenant Colonel (Eng.) Harri Korhonen sums up.