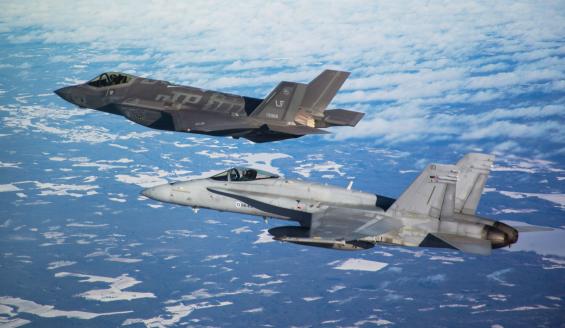 The Government of Finland has 10 December 2021 authorised the Finnish Defence Forces Logistics Command to sign a procurement contract with the Government of the United States on Finland’s next multi-role fighter. The fighter replacing the Hornet fleet’s capability is the Lockheed Martin F-35A Lightning II.

The procurement contains 64 F-35A Block 4 multi-role fighters, substantial and versatile weaponry tailored for the operating circumstances, required training and sustainment solutions, other related systems as well as sustainment and maintenance services until the end of 2030.

In the HX Fighter Programme evaluation of the tenderers’ offers, the F-35 fulfilled the security of supply, industrial participation and affordability requirements of the decision-making areas. In the military capability assessment, the F-35 comprehensive system was the best. The F-35 combat, reconnaissance and survival capabilities were the best suited of the HX candidates.

The F-35 operating and sustainment costs fit the allocated cost frame, and the aircraft development during the life cycle will be feasible with the normal resources of the Finnish Defence Forces. Within the procurement process, several essential security of supply requirements and significant industrial participation have been agreed upon. The essential security of supply requirements relate specifically to independent ability to operate in exceptional circumstances.

The F-35 programme is multinational and its user community large. The system is in service in many European nations including Norway and Denmark.

The current Hornet fleet will be phased out as planned from the year 2025. The first Finnish F-35 fighters will begin service with the Finnish Air Force in 2025 as part of the training of Finnish personnel in the United States. The first F-35s will be delivered to Finland in 2026.  In Finland the F-35 system will replace the Hornet fleet in the fighter wings between 2028 and 2030.

The HX programme replacing the Hornet capability was launched in 2015 by the decision of the Minister of Defence and subsequent Request for Information (RFI) phase. The HX bidding competition began in 2018 with the initial Requests for Quotation (RFQ) sent to the governments of France, Sweden, the United Kingdom and the United States. The aim of the competitive bidding was to build with each tenderer a comprehensive solution fulfilling the requirements and producing the best possible capability to replace the Hornet fleet for the Finnish defence system in the operational environment of the 2030s as well as within the HX system’s lifespan.

The Defence Forces Logistics Command received the final and binding offers from all five HX tenderers by the end of April 2021 deadline. The offers were assessed in accordance with the HX Request for Quotation, decision-making model and Evaluation Handbook to reach the procurement proposal.

The Defence Forces evaluated the offered comprehensive solutions’ capability in three phases based on performance demonstrated in testing events. In the final phase, the military capability effectiveness of each candidate’s HX system was evaluated via a thorough and long-run war game supported by simulation. The Defence Forces’ proposal for the system to be selected was based on the results of the war games and estimated future development potential.

In the HX bidding competition, the F-35 passed the security of supply, industrial participation and affordability decision-making areas. The F-35 solution achieved the highest operational effectiveness and future growth potential in the capability assessment.

The F-35 solution fulfils the national security of supply requirements of Finland. The sustainment of the system is based on the F-35 global sustainment solution tailored to meet the domestic security of supply requirements. The critical maintenance capacity will be created in the Defence Forces and domestic industrial organisations. The solution encompasses the maintenance capabilities to be built in Finland as well as spare components and replaceable assemblies for exceptional circumstances that are under the sole national control of Finland as well as participation in the multinational maintenance network.

The F-35 solution fitted to the allocated funding frame was the most cost-effective. The F-35 had the lowest procurement cost when considering all aspects of the offer. The operating and sustainment costs of the system will fall below the 254 million euro yearly budget.  F-35 operations and lifespan development will be feasible with the Defence Forces’ resources.
No offer was significantly less expensive than others in operating and sustainment costs.

The key industrial participation projects include large-scale production of the F-35 front fuselage in Finland also for other users, production of structural components as well as equipment testing and maintenance capability. In addition, Finland has been offered an engine final assembly project for the Air Force aircraft.

The industrial participation’s domestic employment impact will be 4500 and indirect impact 1500 person-workyears.

The industrial participation contract will be signed by the Ministry of Defence as well as Lockheed Martin and the engine manufacturer Pratt & Whitney.

The F-35 system’s capability was best suited for the Finnish operating environment and HX requirements. The comprehensive system and aircraft’s capabilities in combat, reconnaissance and survival are unsurpassed. The F-35 came first in the assessment or shared the top score in all mission areas and achieved the highest total score. The proposed F-35 package will meet the defined tasks with sufficient efficacy in respect to the requirements of the future operating environment.  The quantity of aircraft and weaponry included in the quotation had an impact in the result. The Finnish F-35 fleet can achieve operational capability within the scheduled timeframe.

The F-35 solution will produce a significant addition to the entire defence system and enhance preventive capability of defence. The F-35A is capable of initiating action in counter-air operations as well as generating and sharing the necessary situational awareness and target data, enabling the F-35 to best support land and maritime operations. The F-35 multi-domain effectiveness across air, land and sea received the highest rating in the assessment.  The stealth and other unique features, such as sensors and networks, support the F-35’s survival in combat. The F-35 multi-role fighter has the highest internal fuel capacity and all sensors incorporated negating the need for an external targeting system or fuel tank.

The F-35 system’s technological solution is sustainable and its future growth potential the best of the offered solutions. The development has been guaranteed for the entire life cycle until the 2060s.

The procurement object is 64 F-35A multi-role fighters in the newest Block 4 configuration. The procurement encompasses multi-role fighter weaponry. The offered F-35 package includes the following weapon types: AMRAAM, Sidewinder, SDB I and II, JDAM-family weaponry, JSM and JASSM-ER. The weaponry is to be procured within the programme funding availability by the end of the year 2035. The weapons package will be optimised during the procurement process, taking into account availability of the newest weapon types and changes in the operating environment. With optimised weapons procurement, the system’s capability will be maximised in the Finnish operating environment and the F-35 system’s life-cycle guaranteed for the longest feasible time.

A remarkable number of additional products and services to be acquired concurrently are related to the procurement of the fighter system and its use. These comprise the sustainment system including test equipment, tools, replaceable assembly and spare part services, as well as information systems, training systems and services, mission support systems and related services as well as the US Government Foreign Military Sales (FMS) procurement process related administrative services to be used. The procurement package also includes the fleet sustainment costs for the years 2025-2030.

The funding for the HX programme totals 10 billion euros. The Parliament has granted the fighter programme a procurement authorisation of 9.4 billion euro for the acquisition of the Hornet replacement system and 579 million euros of a five-year transferable allocation. The transferable allocation is to ensure that the procured entity will be obtained into service as part of the Finnish defence system. Twenty-one million euros have thus far been spent in prepar-ing for the procurement.

The acquisition equals approximately 8.378 billion euros. The cost of multi-role fighters is 4.703 billion euros and air-to-air missiles AMRAAM and Sidewinder 754,6 million euros. Service equipment, spare and exchange parts, training and sustainment solutions, other related systems as well as sustainment and maintenance services until the end of 2030 cost 2,920 billion euros.

Operational facilities, aircraft hangars and storages as well as runway structures and infrastructure for the procured system will be constructed in Finland.  This is based on national and international safety and security requirements. Construction costs, costs of industrial participation, personnel costs and other project costs amount to 777 million euros.

Additionally 823,8 million euros is reserved for the final optimised weapons package and to control future contract amendments. Part of the weaponry will be obtained at a later date as per the aircraft delivery schedule.

The defence system research in the Defence Forces strategic planning has concluded that multi-role fighters have a key role and responsibility in the defence system of the 2030s’ operating environment. The HX programme was established to find a replacement for the current multi-role fighters and since 2015 it has been working to obtain the best HX solution for Finland.

In various phases of the HX programme, preparation and evaluation work has involved the best national and international expertise of 100-200 personnel with wide skills profiles.