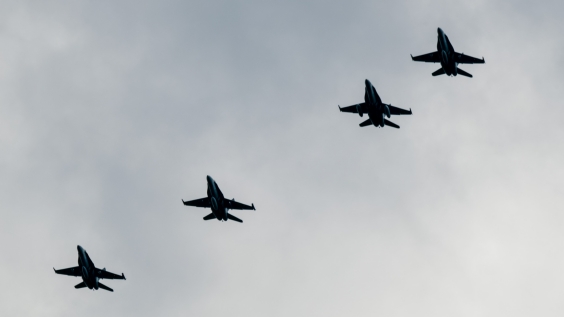 The Arctic Challenge Exercise 21 organised by the air forces of Finland, Sweden and Norway has been scaled down from the original number of participants due to the coronavirus pandemic.

Alongside with the host nations’ units, flight detachments from the Netherlands, the United Kingdom, Germany, Denmark and the USA as well as a NATO E3A AWACS aircraft will be seen in the exercise.

Flight operations will be conducted during both weeks from Monday to Friday 10 - 18 Finnish time (9 - 17 Norwegian and Swedish time). The Finnish Air Force is deploying 12 Lapland Air Command F/A-18 Hornet multirole fighters, two Hawk jet trainers and a C-295M transport aircraft to the exercise. Lapland Air Command is the designated air base for the exercise in Finland, supporting 10 German Air Force Eurofighters and two US Air Force KC-135 Stratotanker aerial refuelling aircraft. Other bases used for exercise operations are Bodø and Ørland in Norway as well as Luleå in Sweden.

Besides the reduced number of participants, all recommended coronavirus precautions such as quarantines, coronavirus testing and grouping personnel into smaller units will be taken. Restrictions and changes caused by the pandemic mean that detailed information about ACE 21 will be confirmed closer to the beginning of the exercise.

Conducted every second year since 2013, the ACE exercises form part of the NORDEFCO cooperation between Finland, Norway and Sweden. The nations’ air forces organise combined Cross Border Training (CBT) air combat missions operated from their northern home bases on a near weekly basis. The cost-effective combined training concept is also applied to larger air operations exercises, such as ACE. This is the first year Denmark will be contributing to the planning stage of the exercise.

The objective of the exercise is to train participating forces to conduct dissimilar aircraft combat in large composite air operations (COMAO) safely and effectively. The exercise aims to develop air combat techniques and tactics between dissimilar aircraft. By utilising the CBT concept, interoperability as well as providing and receiving host nation support will also be developed.