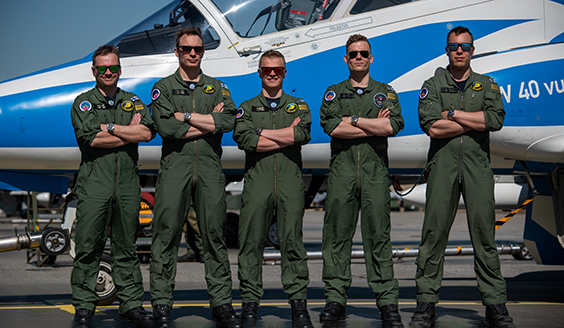 The aerobatic team has gained new members on both the flying line-up and support team on the ground. Something new will also be seen in the display sequence.

In 2021 the Midnight Hawks’ continuing pilots from the previous season are Team Leader, Midnite 1 Captain Vesa Loukko, Midnite 3 Captain Juho Tervahartiala on the leader’s right wing and Midnite 4 Captain Oskari Tähtinen in the trail position. The new display team member is Midnite 2 flying on the left wing, Captain Jussi Nokso who has transitioned to the position from the commentator role.

The display sequence of the ongoing season is more dynamic than before and includes several vertical and less frequently seen manoeuvres. More salutes and a novel manoeuvre for the Midnight Hawks, a big T-loop flown tilted at an angle towards the crowd, have been added to the routine.

– The barrel roll is also a new trick for us. This year’s sequence is somewhat shorter, and it has more action than the one last year, says Loukko.

The initial training period that began January culminated in the first public flight display on 15 May at the Air Force Academy in Tikkakoski, Jyväskylä when the Midnight Hawks performed at the recruitment event arranged for the Pilot Reserve Officer Course.  The new flying team member, Nokso says he has adapted to display flying well.

– At first you’re amazed how different a manoeuvre can feel than what it looks like from the ground. It’s been a steep learning curve for a new guy but I’ve been coping well, he says.

All Midnight Hawks’ members have extensive experience operating the Hawk jet trainer and F/A-18 Hornet fighter aircraft. When the plane takes off, their focus on the flight and flying is a solid 100 percent.

– You might feel a tinge of anticipation when you’re stepping to your plane and sitting there waiting to taxi and for the crowd to arrive. But once you’re airborne, you truly have to give it all (your focus) so you won’t have time to notice if you’re feeling tense or not, Nokso says.

The latest additions to the Midnight Hawks’ ground support personnel are the new commentator Captain Joonas Sunnari as Midnite 7 and Midnite 0 Major Teemu Mahlamäki who is the supervisor, directing the display sequence from the ground. First Lieutenant Marko Nieminen continues as the technical supervisor, Midnite 10.

Each team member has his own role

Display flying is teamwork in which all participants have clear roles and places. The difference in flying the different positions is distinct. Loukko is the only team member who has flown in two positions, the wing and the lead, during his Midnight Hawks career.

– The wing position is harder work physically and mechanically and it literally makes you sweat.
When flying the leading aircraft, you have to think about the entire display - how you can make sure that everything falls in place and flying is easy enough for everyone. If you operate the leading jet in a challenging way, you make flying harder for the wing pilots and the formation won’t look good.

Flying the trail, or slot, position, Tähtinen emphasises that in the role of Midnite 4 you have to specifically focus on the whole display’s visual and illusory aspects perceived by the viewers. For example, in some manoeuvres you have to position your plane so that it seems to be directly behind and below the leading aircraft, whereas in reality you always fly slightly lower or higher.

– But from the ground it looks like we’re in a diamond. In the slot position you need to know where the spectators are and adjust your position based on that. The weather also affects how close to the leading plane the wingmen can fly, he tells.

– Compared to the slot, the correct wing position is harder to maintain when you're there on the wing’s extension and performing rolls, and in the meanwhile, you’re steering the plane three-dimensionally at once, Loukko continues.

Flying on the right wing, Tervahartiala in turn stresses that sometimes easy-looking manoeuvres can be demanding. The end result of extended rehearsals may seem simple, and the challenge posed by the manoeuvre may go unnoticed by the viewers.

– For example, last year we performed a loop setting out from the swan. So, a start on the wing of Midnite 4 and a switch to the diamond in the middle. When I pulled that one off, I took the wing position of Midnite 1 at full throttle with my canopy pointing down. But the crowd only saw the loop, and many people missed the formation change. Anyway, you do enjoy it yourself when you manage to pull off a tough manoeuvre.

– In this year’s routine the tricks that are hard are also the ones with the highest wow-factor. At least to myself, the manoeuvres flown line abreast are challenging, for example the big T, Tervahartiala continues.

Team play on the ground before take-off and in the air during the show is vital and necessary.

– When every pilot flies well, it’s easy for everyone but when one starts to fall behind, it becomes hard for us all and then there is no clear line to fly on. Nonetheless, this team has polished out all the rough edges. At its best it’s easy, and at times it’s more demanding, Tähtinen says.

The commentator is an essential part of the display

Enhancing the display’s impact on the audience from the ground, the commentator also adds artistic flair to the show. Midnite 7 describes what happens in the sequence and what is challenging in the manoeuvres. The commentator is given artistic freedom to choose the music and write his lines as he pleases.

– Little by little I’ve been getting used to this role. I’ve been riding along and watching videos of the display routine. I’ve been trying to memorise the sequence so that I will be able to synchronise the music and commentary for a smooth delivery, Sunnari tells about his first months as a Midnight Hawk.

Displays at home and abroad

Due to the pandemic, the season’s upcoming displays are subject to change but the team hopes to be able to perform and meet the crowds within the limits of restrictions soon. The Midnight Hawks will be seen in August at Lapland Air Command’s Careers in Military Aviation Day as well as the Kaivopuisto Air Show in Helsinki, unless coronavirus restrictions are tightened.

– Many events have been cancelled but let’s hope the rest of the displays planned for the end of summer will take place. We also have a couple of shows abroad and some flypasts in different events planned, Loukko says.

Follow the Midnight Hawks and Air Force on social media:

Finnish Air Force to participate in...

Finnish Air Force to participate in Luftförsvarsövning 21 in Sweden